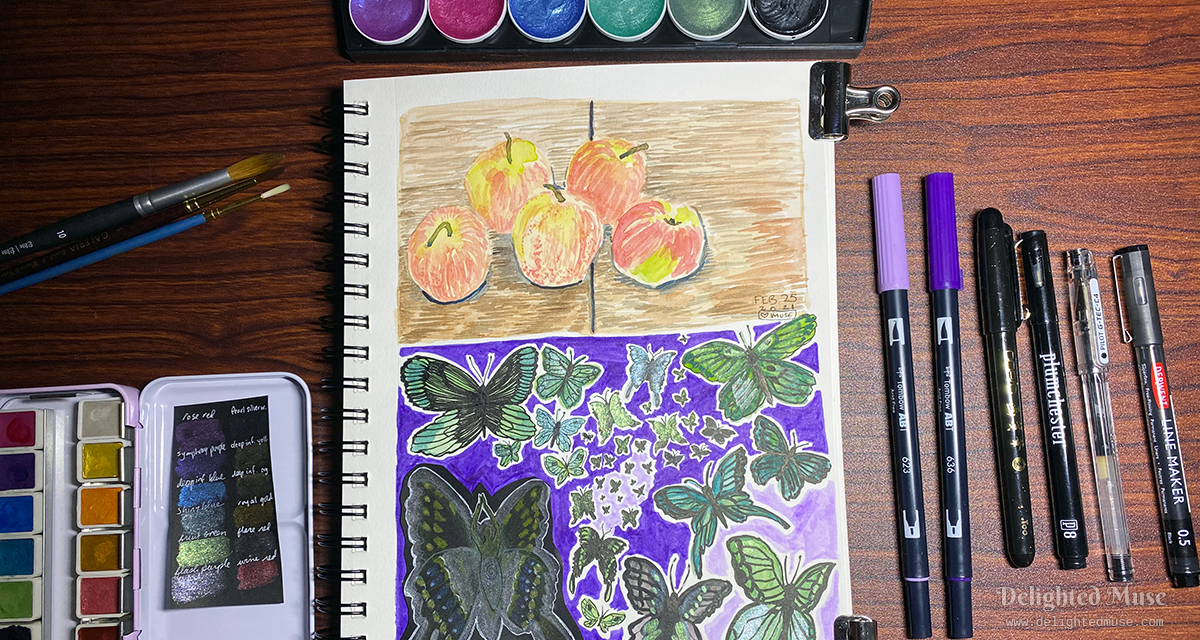 I’m glad I filled a sketchbook page, even if at first it felt like my heart wasn’t in it tonight. Pushing past the “I don’t feel like this/I don’t know what to draw that’s good enough” thoughts and into painting and drawing as an act of love for the practice itself: is that the secret to maintaining a regular art practice?

It was the second half, with the haphazard butterflies, where I wanted to give up. The apples I painted at lunch, and that was enjoyable and relaxed. Though the downside of squeezing in sketchbook time midday is I ran out of time and couldn’t add pen and ink on top of my watercolor before I had to sign back on to work. So they feel so unfinished to me! But I was painting from life and I don’t want to go back in with a pen now, when the apples have been put away and I’d be drawing solely from memory. I don’t think it would help the painting.

The butterflies started as an experiment with Paul Ruben glitter watercolor palette on black paper. It wasn’t really working how I wanted, so I cut that drawing out and taped it into the lower left, then filled the rest of the space with green watercolor wings. After the paint dried (and I layered some different shades of non-glitter greens and blues under glitter layers), I went in with a few different fineliners and ink pens. I really liked using the Copic Gasenfude Nylon Brush, even if it makes the lines feel a bit sloppier – it’s so fun! That was what I used on the the two lower butterflies in the bottom right corner.

I glanced at photos from the Smithsonian’s butterfly page (scroll down to the bottom of that page for lots of photos) while I worked, but only very loosely – I wasn’t following a specific photo or species, but kind of mixing my impression of the shapes together. I was letting myself play and see what would happen. Which is also how the dark purple background happened, to try tying them all together a bit. I like the doodle/rough effect. I am tempted to do some anatomical studies of butterfly wings in the future, perhaps to better draw faery characters, but we shall see.

It’s around 9:45pm now. My plan to soothe myself with video games/books/anime after dinner tonight did not take into account that the hours of the evening are limited. ;_;

I was watching Tenchi Muyo! Tenchi Universe earlier, but it was too distracting to paint along side! And it wasn’t even that it was subtitled: I was watching the dub, since it’s so nostalgic, like firing up VHS recorded copy of Toonami ^_^. So I have episode 2 paused in another window (it’s free on Funimation’s site, albeit with ads). And on the reading front, I am going to take another crack at reading Dark of the Moon later tonight, which I stalled out on a couple months ago because *gestures at general state of everything*.

Though, listening to my “relax, it’s gonna be okay” playlist, and hearing “Gotta Knock a Little Harder”, I think Cowboy Beebop would have been tonally more inline with my mood tonight. I appreciate the carefree comedy of Tenchi, but blah… tonight I’m more in the floating in a spaceship in the void mood.

Musical aside: The actual playlist is called “Mellow” and has stuck with me since college, and is a rough recreation of a similar playlist I had in high school (but alas lost when I…*big deep breath* …deleted all of my Kazaa music…out of respect for copyright…from the influence of my music major friend and roommate. I may be slightly regretful of that one *sigh*. But I more than made up for it by spending too much of my discretionary budget on music in the 2008-2010 era of living at home with my parents).

I love this playlist so much. T_T I tried to kind of recreate it in Spotify, but alas it’s impossible, as much of it is anime music (some imported on CD from Amazon way back when, some of it the only thing saved in the great Kazaa deletion, thanks to some mixed CDs I’d made). Every once in a while a new track sneaks up in the list and changes the order, but it’s been pretty rare that it changes too much.

Anyway, this playlist has 200+ songs, but I usually only get through the top 20 in any given listen. I made it to 36 tonight, so why not list them all out? This is 100% probably only interesting to me, but hey – that’s why I have this blog! Mwahahahaha >:D

Listening to: I am a Pioneer (Tenchi Muyo!)
Current mood: geeky 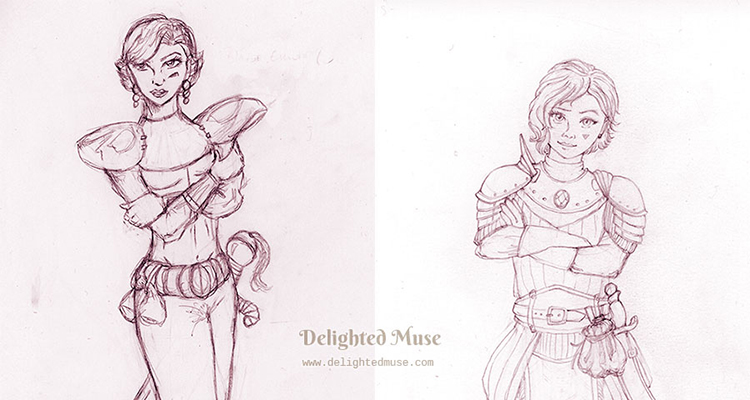 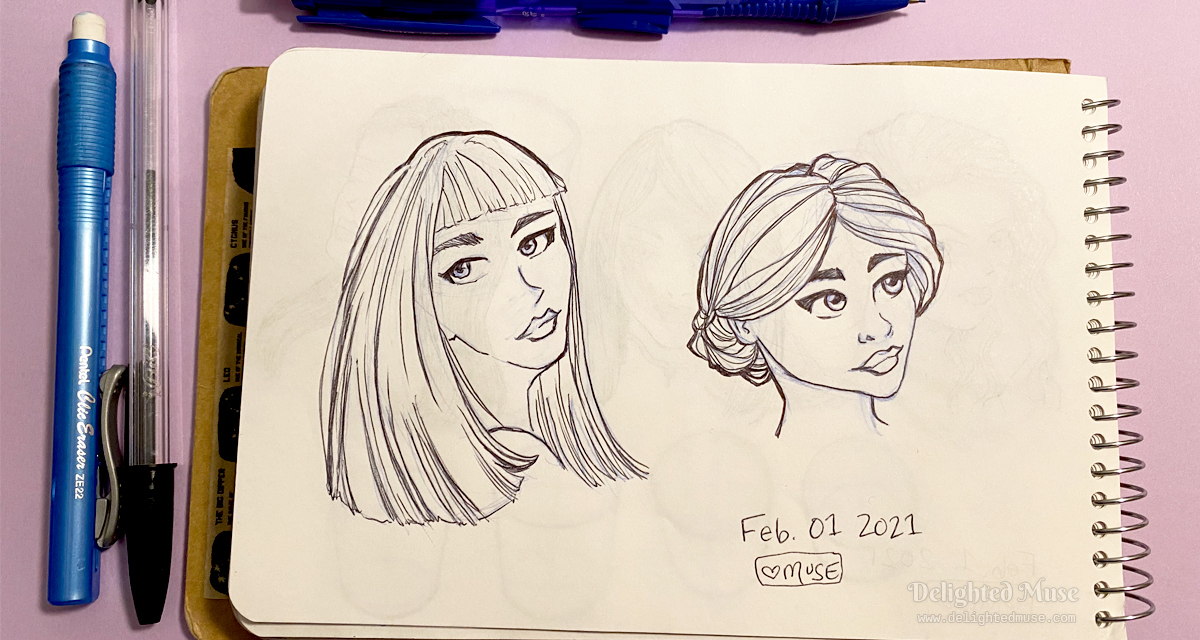